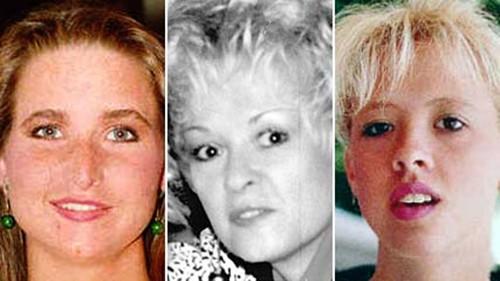 Suzanne Streeter, 19, along with her mother Sherrill Levitt, 47, and best friend Stacy McCall, 18, all vanished June 7, 1992 from Springfield, Mo.

The girls had planned on staying at a hotel in Branson, Mo., then visit the White-Water amusement park in the morning. Stacy called her mother to tell her they instead decided to stay at a friend’s home in Battlefield, Mo.

After the police were called due to a noise complaint, the two girls head over to Sherrill’s house to spend the rest of the night.

Sherill had been home that evening and the girls arrived at approximately 2:15 a.m.

The following morning their friends tried to reach Stacy and Suzanne at the mother’s residence, phoning and stopping by but they could not be located. All the women’s personal belongings were found inside the home but the three were never found. The only physical evidence left at the scene was a broken porch light.

If you have any information regarding the whereabouts of Suzanne Streeter, Stacy McCall or Sherrill Levitt, please call the Springfield Police Department at 417-864-1810.

Charlene Voight, 36, had just graduated from Cal Poly Pomona with a degree in Landscape Architecture and excited to start in her new career path. She decided to pursue her career and relationship and travel from Calif., to Littleton, Colo., and move in with her boyfriend.

After not hearing from Charlene for several days, her parents reported her missing on July 8, 2016. Her car was found abandoned in a gravel lot about a block from the apartment complex she had been living with her boyfriend.

A few weeks after Charlene vanished her boyfriend was arrested on unrelated charges of sexual assault involving another woman.

Authorities searched a Commerce City landfill in March following her disappearance, but the search ended after four months. Police never made public what prompted them to conduct a search. Charlene’s was not recovered; however, they did locate some of her clothes, now undergoing DNA testing to see if they link to a suspect in her disappearance.

If you have any information regarding the disappearance of Charlene Voight, please call Littleton Police Department at 303-794-1551.

Sarah Galloway, 38, has Down’s Syndrome. On the morning of March 21, 2019, she vanished from the front porch of her rural home in Picture Rocks, near Tucson, Ariz. Sarah functions at the level of an 8-year old child and very trusting of people. Her mother Sherry Galloway says, “Nobody is a stranger to Sarah.”

Volunteers immediately canvassed the area surrounding the residence, along with canines and aerial searches but the ground searches were later called off because they produced no leads. Pima County Sheriff’s Office says the investigation is ongoing.

If you have any information about the disappearance of Sarah Galloway, please call Pima County Sheriff’s Office at 520-88-CRIME (27463).

Corinna Slusser, 19, was last seen in the early morning hours of September 20, 2017, at the Haven Motel in Queens, New York.

Two months earlier in July, Corinna contacted her mother and told her that she had met a man who had offered her a place to stay in New York City.  She immediately left with only her cell phone, identification, and the clothes on her back. Daily, Corrina was on Facebook and Instagram, but all social media activity has since stopped. Her family fears Corinna has been kidnapped into sex trafficking.

NYPD says the investigation is ongoing.

If you have any information about the disappearance of Corinna Slusser, please call NYPD at 800-577-TIPS (8477).

Keith Bailey, 48, vanished August 6, 2019. He went to a three-mile walk before work that Tuesday morning, but his wife Nikki Bailey later found out he never arrived at work. His cell phone was last pinged on Highway 87 heading northeast to Payson, Ariz.  He was driving a newly purchased dark-gray 2018 Toyota Tacoma truck with temporary license plates.

His credit card revealed he had filled up on fuel in Payson but there has been no further activity on their bank account.

Keith is the principal materials engineer for ARTL Laboratories in Phoenix. “He wasn’t sleeping,” said his wife Nikki. “He was having trouble going to work. And he loved that job.”

If you have information about the disappearance of Keith Bailey, please call the Phoenix Police Department at 602-262-6151.

Elaine Park, 20, vanished during the early morning of January 28, 2017, in Calabasas, Calif. Elaine had driven to her on again – off again boyfriend’s home to stay the night but he told authorities that Elaine had a panic attack around 4 a.m. the following morning. He said he tried to get her to stay at his home, but she left in her vehicle.

Three days later Elaine’s 2015 Honda Accord was found abandoned on the shoulder of Pacific Coast Highway unlocked with the keys still in the ignition. Authorities found her cell phone and other personal belonging s inside the car.

If you have any information about the disappearance of Elaine Park, please call the Glendale Police Department at 818-548-4911.

Stacy Smart, 51, has been missing from the small Trinity County town of Lewiston, Calif. According to the Trinity County Sheriff’s Office, she vanished October 12, 2016, from the home she shared with her boyfriend.

Stacey’s daughter Nicole Santos said her mother usually celebrated Halloween with her but when she didn’t show up at her home that night, Santos went looking for her the following day and found out her mother’s friends had not seen her for weeks. Trinity County Sheriff’s Office says the investigation is ongoing.

If you have any information regarding the disappearance of Stacey Smart, please call the Trinity County Sheriff’s Office at 530-623-3740.

Logan Schiendelman, 19, vanished May 19, 2016, from Tumwater, Wash. Raised by his grandmother, she pinged his cell phone that revealed Logan was in the area of his mother in Olympia. Furth activity on his phone indicated he had driven south on Interstate 5, then back north, then south again, then north, then south again.

His black, 1996 Chrysler Sebring was later found abandoned on Interstate 5 between Tumwater and Maytown. Several drivers called 911 describing a man jumping out of his vehicle and running into the woods.

Foul play has not been ruled out in this case. There is a $10,000 reward for information leading to his whereabouts.

If you have any information regarding the disappearance of Logan Schiendelman, please call the Thurston County Sheriff’s Office at 360-786-5599.

Jasmine had met a woman through social media and traveled from her home in Texas to Detroit to visit the woman and her family for the Thanksgiving holiday. On the evening of December 4, Jasmine and the woman for into an argument about Jasmine’s social media posts and has never been seen again.

The woman told authorities that Jasmine had left her home and ran out into the cold leaving her cell phone, purse and identification at the home. Foul play is suspected in this case.

There is a $2,500.00 reward for information that leads to the whereabouts of Jasmine.

If you have any information regarding the disappearance of Jasmine Moody, please call the Detroit Crime Stoppers at 1-800-SPEAK-UP.

Kristen was an industrial design major at North Carolina University and traveled to San Francisco to attend a summer photography course at the University of California at Berkeley.

She was employed part-time at Spinelli’s coffee shop at the Crocker Galleria in the financial district of San Francisco. She also worked at Café Musee inside the Museum of Modern Art on the weekends.

On June 23, Kristen asked a coworker at Spinelli’s for directions to Baker Beach which is located next to Land’s End Beach west of the city. Her shift ended at 3:00 p.m. that day, but she was seen on the second level of the Galleria with an unidentified blonde woman. That woman has never been identified.

Despite thousands of leads and appearances on national television shows nothing has led to information that would lead to Kristen. Police say the investigation is ongoing.

If you have any information about the disappearance of Kristen Modafferi, please call Oakland Police Department at 510-238-6341.